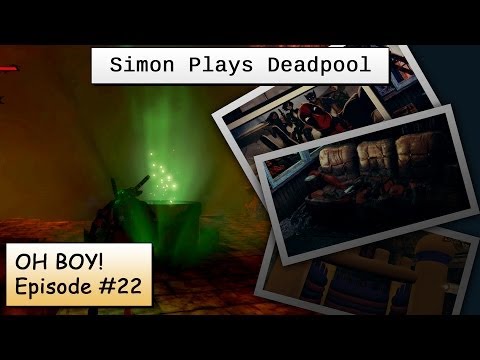 In the "Deadpool" you follow the mercenary anti-hero Wade Wilson, A.K.A. Deadpool (oh really?). Deadpool is a lovable marvel character, know for his powers (regeneration & teleportation), weapons, and his mouth. Deadpool is known as "the merc with a mouth," and will OFTEN break the 4th wall in the comics - and in this game. The game is really fun, with a lot of great moments, both his comments, his brains comments, and his actions!

BlessHayGaming is a gaming channel with the brothers Jonas (PigeonofWar) and Simon (SEMilfred) Milfred. They play various games, both bigger-company games and indies, and have multiple ongoing series at a time! Monday through Friday you are promised one episode, of one of their normal series, each day, and as a side dish for that, sometimes they will pull a one time play of other games during weekends (or even as extras on work-days).

..And beside pure gaming videos: On BlessHayGaming.tumblr.com Simon writes reviews of the games he is done playing AND in one of Simon's series he is not the gamer -- he is the developer!
Author
Content Type
Bless Hay Gaming
video/mp4
Language
English
Open in LBRY