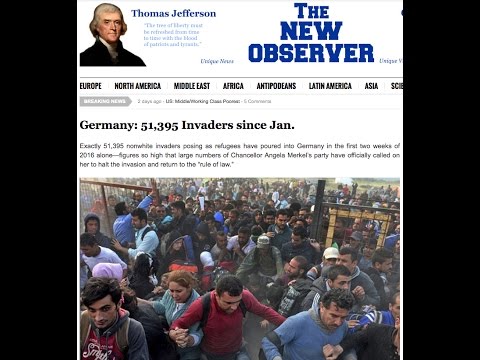 According to the German Federal Office of Migration and Refugees, 51,395 new migrants have entered Germany in the first two weeks of 2016 – that’s over 3,600 per day.
Experts estimate there are another million in route and an additional 2 million in camps along the northern Turkish border ready to head north. German police have issued public warnings in the past that only a fraction of the invaders bother to register at any German “reception center”. The rest simply disappear.
The rising anger of the German people is reaching desperation pitch.
Earlier this week, two German judges announced that Merkel’s “open door” policy was not made with the approval of the German Parliament.
Now, for the first time, members of Merkel’s own Christian Democratic Union party have joined the angry voices.
A petition circulating in the German Parliament calls upon Merkel to close the doors:
“We face an overtaxing of our country and therefore demand a review of current immigration practices [and] quickly return to the application of existing legislation.”
The petition points out that Merkel is not enforcing Section 18 of Germany’s Asylum Procedure Act. It says that a foreigner seeking asylum:
“… shall be refused entry if he enters from a safe third country….”
Of course migrants making their way to Germany have to pass through many safe countries.
I’m still reporting from Washington. Good Day.
Author
Content Type
The Still Report
video/mp4
Language
English
Open in LBRY