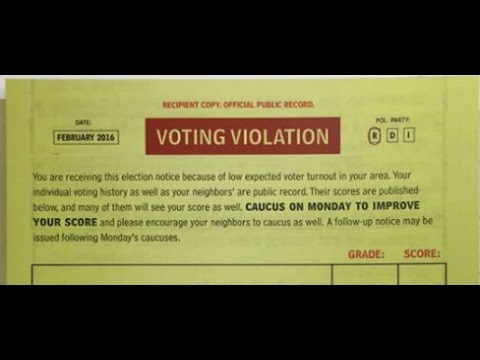 More bad news for Ted Cruz. This time he is in trouble with the Iowa Secretary of State. Why?
Yesterday, Iowa voters started getting these yellow “Voting Violation” notices in the mail that appear to come from the Iowa government that say:
“Recipient copy, official public record, Voting Violation”.
It then gives the recipient’s name and the name of their spouse and the names of close-by neighbors and their so-called voter grades and scores. Then it goes on to explain that:
“You are receiving this election noticed because of low expected voter turnout in your area. Your individual voting history as well as your neighbors are public record. Their scores are published below, as many of them will see your score as well. Caucus on Monday to improve your score and please encourage your neighbors to caucus as well. A follow-up notice may be issued following Monday’s caucuses.”
The intended implication of the mailer is to induce people by deception to come out to the Caucus to improve your score.
This morning, the Iowa Secretary of State hit the Cruz for President campaign hard in the local papers.
“Today I was shown a piece of literature from the Cruz for President campaign that misrepresents the role of my office, and worse, misrepresents Iowa election law.
Accusing citizens of Iowa of a “voting violation” based on Iowa Caucus participation, or lack thereof, is false representation of an official act.
There is no such thing as an election violation related to frequency of voting. Any insinuation or statement to the contrary is wrong and I believe it is not in keeping in the spirit of the Iowa Caucuses.
Additionally, the Iowa Secretary of State’s Office never “grades” voters. Nor does the Secretary of State maintain records related to Iowa Caucus participation.
Caucuses are organized and directed by the state political parties, not the Secretary of State, nor local elections officials.
Also, the Iowa Secretary of State does not “distribute” voter records. They are available for purchase for political purposes only, under Iowa Code.” – Paul D. Pate, Iowa Secretary of State”
Oh, one other thing. The first time these were used were in the 2012 race by guess who? Barack Obama. It was met with similar condemnation then, as well.
I’m Still reporting from Washington. Good Day.
Author
Content Type
The Still Report
video/mp4
Language
English
Open in LBRY