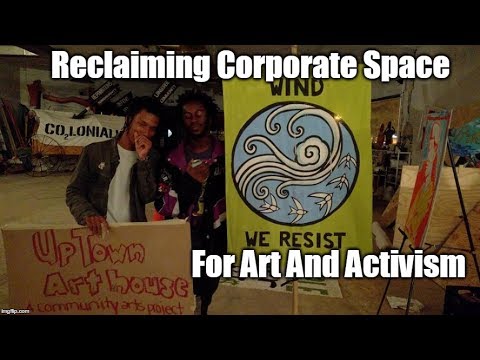 Published By
@RedactedTonight
Created On
17 Dec 2019 21:41:24 UTC
Transaction ID
0058062be2e509942f17d1fb3c12d9dd0ccbb347f72e278a2aa7feeebde0dc83
Cost
Safe for Work
Free
Yes
Uptown Art House: Reclaiming Corporate Space For Activism And Art
Intense gentrification and corporate takeover of land is a problem in cities all over America. Beyond people not being able to have a reasonable place to live, there's also a serious dearth of public spaces where community, art and activism can organize and flourish. This takeover is completely antithetical to movement and resistance work. That’s why a new space in Washington, DC called the ‘Uptown Art House’ is so important. From it's origins of being the arts-making location for the People’s Climate March, the ‘Uptown Art House’ is now a rapidly-evolving community and arts space, which has quickly become a hub for grassroots activities. Led by a group of local POC artists and activists, it’s their vision to house and build DC’s thriving social justice movements and independent arts scene.

GET FREE TICKETS to be in our LIVE AUDIENCE in Washington DC! Email RedactedTix@gmail.com.

OTHER CITIES - We tour regularly with live stand-up comedy. For a list of where we'll be performing our stand-up comedy shows, go here - http://LeeCamp.net/schedule/