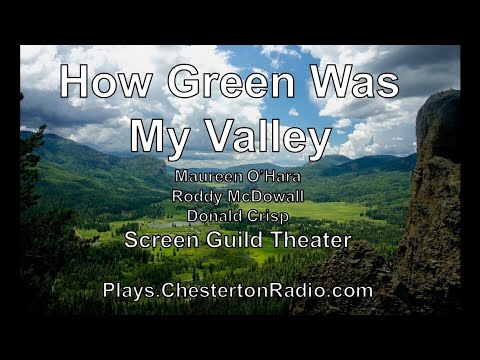 Published By
@ChestertonRadio
Created On
19 Jan 2022 03:35:34 UTC
Transaction ID
52f2571f1f10aedfe64e10b39750639e1f2a9cf8d0fd53ee96887f321b672354
Cost
Safe for Work
Free
Yes
How Green Was My Valley - Screen Guild Theater
A young Huw, the youngest child of Gwilym Morgan walks home with his father to meet his mother, Beth. His older brothers all work in the coal mines with their father, while sister keeps house with their mother. Huw's childhood is idyllic, the town, not yet overrun with mining spoil, is beautiful, and the household is warm and loving

How Green Was My Valley is a 1941 American drama film directed by John Ford. The film, based on the best-selling 1939 novel of the same name by Richard Llewellyn, was produced by Darryl F. Zanuck and scripted by Philip Dunne. It stars Walter Pidgeon, Maureen O'Hara, Anna Lee, Donald Crisp, and a very young Roddy McDowall.

It tells the story of the Morgans, a hard-working Welsh mining family, from the point of view of the youngest child Huw, who lives with his affectionate, kind parents and his five brothers, in the South Wales Valleys during the late Victorian era. The story chronicles life in the South Wales coalfields, the loss of that way of life and its effects on the family. The fictional village in the film is based on Gilfach Goch; where Llewellyn spent many summers visiting his grandfather, and it served as the inspiration for the novel.

It was nominated for ten Academy Awards, winning five, famously beating Citizen Kane, Sergeant York and The Maltese Falcon for Best Picture, while Ford won for Best Director, Donald Crisp for Best Supporting Actor, Arthur Miller for Best Cinematography, and Richard Day, Nathan H. Juran and Thomas Little for Best Black-and-White Art Direction-Interior Decoration. In 1990, the film was selected for preservation in the United States National Film Registry of the Library of Congress as being "culturally, historically, or aesthetically significant". The Academy Film Archive preserved How Green Was My Valley in 1998.

All our shows in one Playlist!
http://Player.ChestertonRadio.com